Nothing is ever finished: Article one 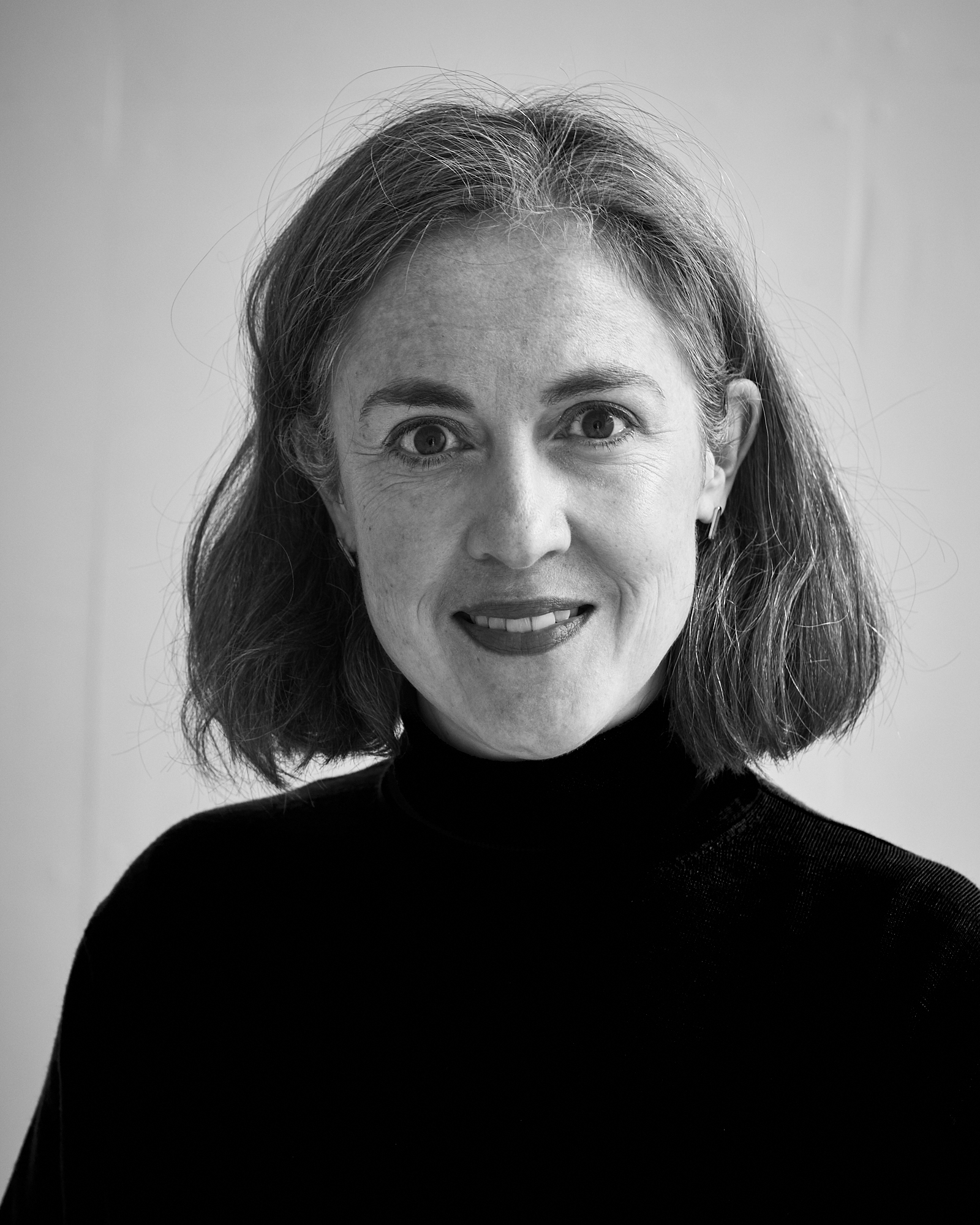 Cathy Haynes is a curator, artist, writer and educator based in London, UK. In 2014 she was Chisenhale Gallery’s artist in residence in Victoria Park, London, making Stereochron Island, a public project reimagining the park as a tiny island territory campaigning to become a state without clocks. In 2013 she was Timekeeper in residence at the UCL Petrie Museum of Egyptian Archaeology, London, where she devised and led an interdisciplinary research project into how we model time across history and culture. Cathy was a founding faculty member and the former Curator at The School of Life. She has also been Curator for Art on the Underground and Head of Interaction at Artangel.
www.cathyhaynes.org
Twitter: @CathyHaynesUK 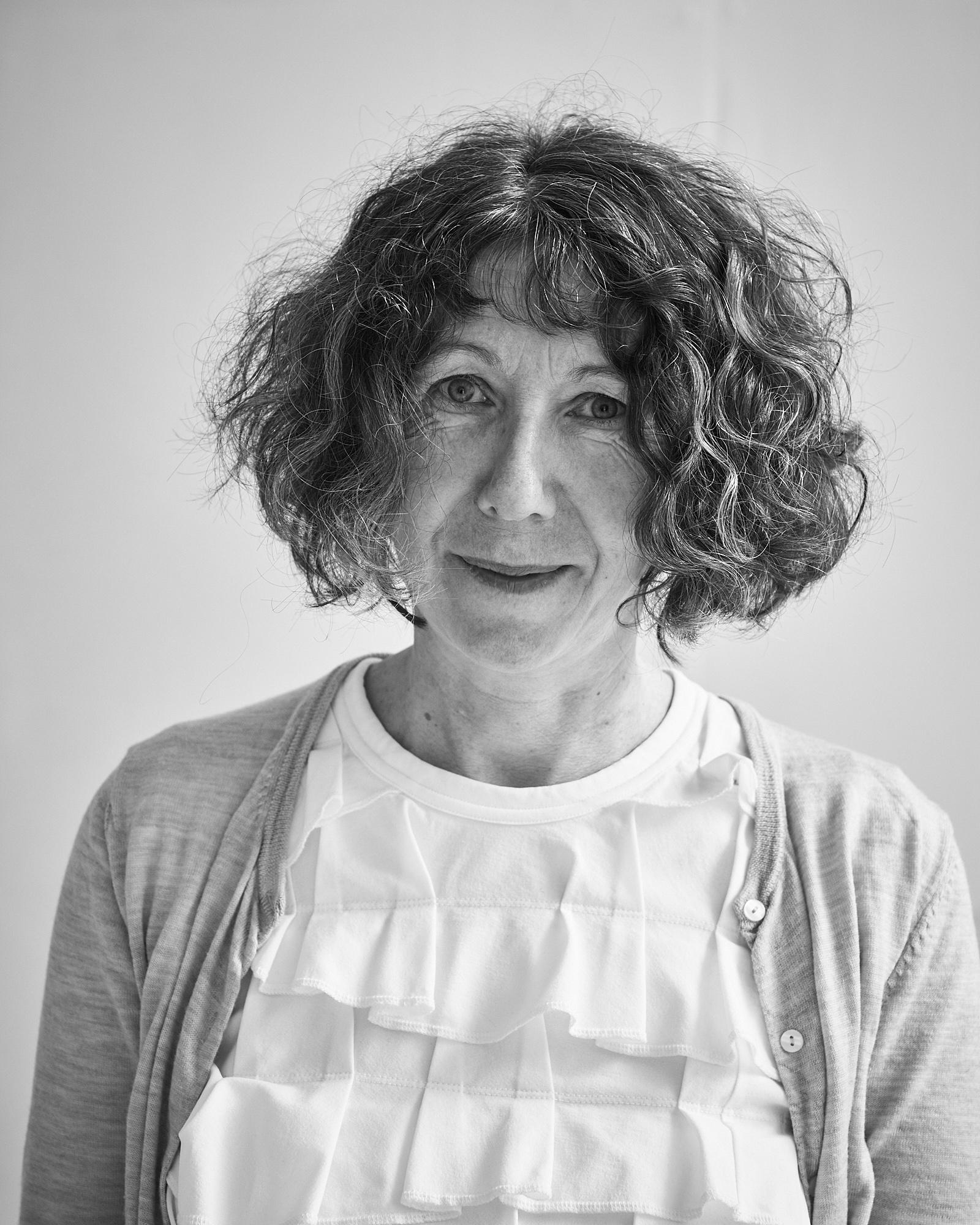 Fiona Raby is University Professor of Design and Social Inquiry and a Fellow of the Graduate Institute for Design Ethnography and Social Thought at The New School in New York, USA. She was Professor of Industrial Design at the University of Applied Arts in Vienna between 2011–2016 and was Reader in Design Interactions at the RCA between 2005–2015. She studied Architecture at the RCA before working for Kei’ichi Irie Architects in Tokyo. She also holds an MPhil in Computer Related Design from the RCA where she taught in the Architecture department for over 13 years.
www.dunneandraby.co.uk
Instagram: @ny_f 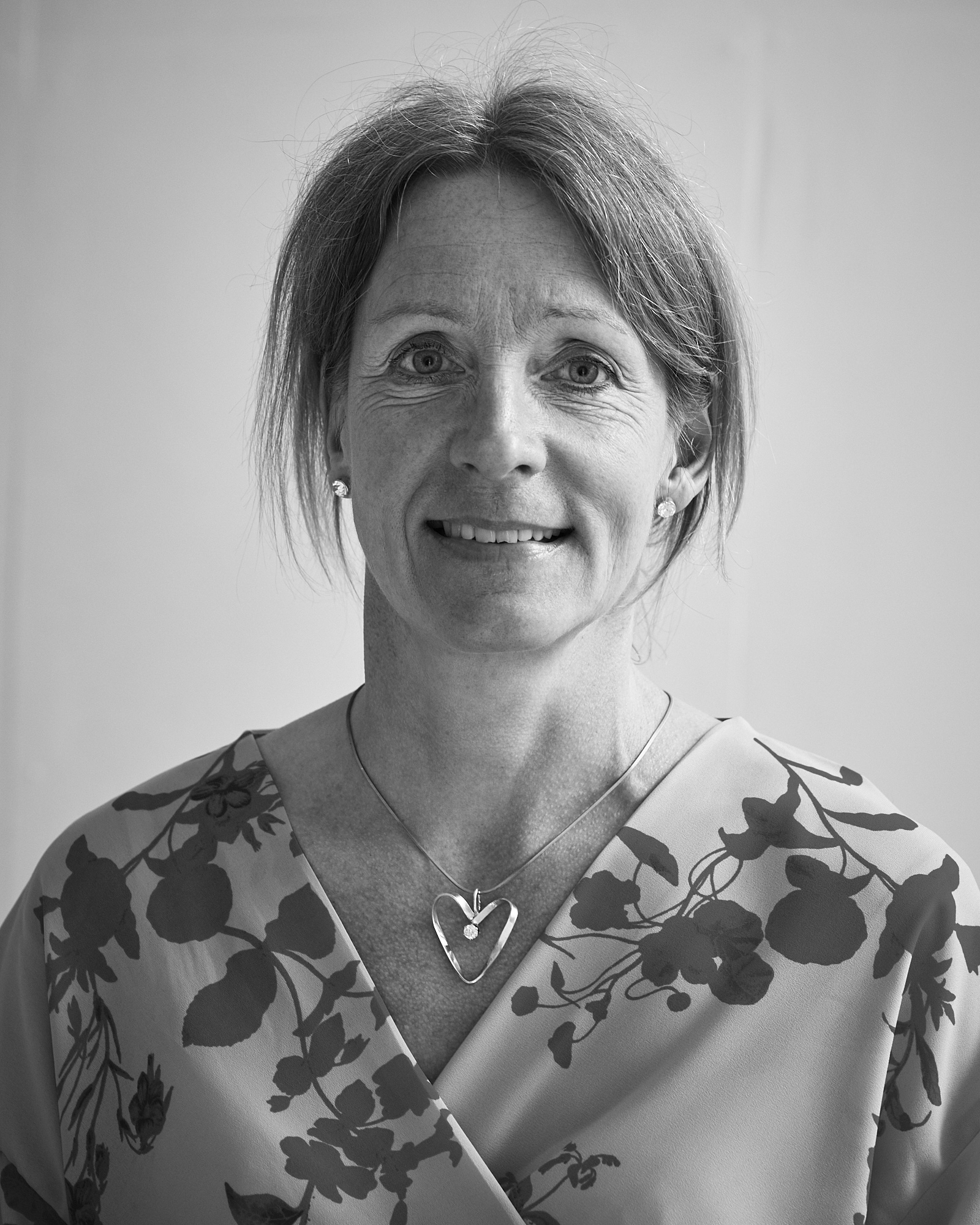 Anna Lagergren is an archaeologist and farmer living in Veberöd, Skåne. Working as an archaeologist since 1989, she has carried out numerous excavations in Skåne and has contributed articles to many publications. She worked for the Swedish National Heritage Board at Lund Municipality from 2000 to 2013 and has participated in, and written about, several of the recent excavations in Brunnshög. Her main area of interest lies in the Stone Age and how our ideas of the past and of time affects the image of ourselves and our actions today. 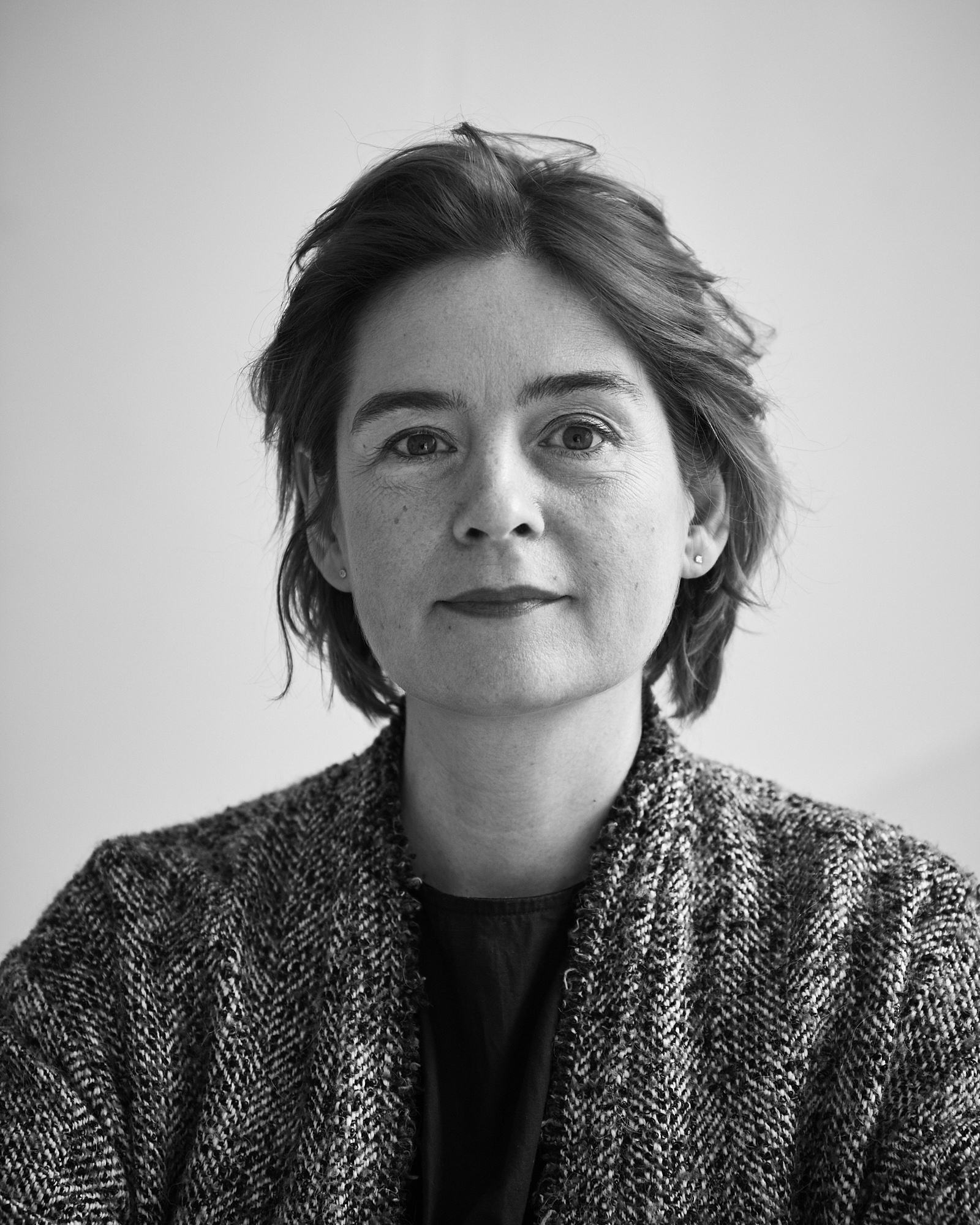 Lisa Rosendahl is a freelance curator, based in Berlin, Germany. Between 2014–2017 she was Curator at Public Art Agency Sweden, commissioning projects for the public realm. She was Director of Iaspis, the Swedish Arts Grants Committee’s international programme for visual art, architecture, design and craft, from 2011 to 2013. Previous positions include Director of Baltic Art Center (Visby, 2008–2010); Acting Director of ELECTRA Productions (London, 2008); Associate Curator at Röda Sten Konsthall (Gothenburg, 2006–2008) and Director of Exhibitions at Lisson Gallery (London, 2003–2006). She has contributed texts to numerous artist monographs and exhibition catalogues and is the co-editor of the anthology ‘Work, Work, Work – a reader on art & labour’, published by Iaspis and Sternberg Press in 2012. Recent exhibitions include: ‘SUPERFLEX Retrospective – a Value Enhancing Machine’ (Kunsthal Charlottenborg, Copenhagen, 2013); ‘The Society Machine’ (Malmö Art Museum, 2016) and ‘Extracts from a Future History’ (Public Art Agency Sweden, Luleå, 2017). She is a member of the Råängen Advisory Group.

Jes Fernie is an independent curator and writer based in the UK. She works with galleries, architectural practices and public realm organisations on commissioning programmes, exhibitions, and residency projects. She has worked with a broad range of organisations including Tate, Peer, Serpentine Gallery, Focal Point Gallery, Olympic Delivery Authority, RIBA, ACE London, St Paul’s Cathedral, Lund Cathedral and the RCA. She was invited by Lund Cathedral to develop Råängen with White Arkitekter in 2016.
www.jesfernie.com
Twitter and Instagram: @jesfernie

Lena Sjöstrand is Chaplain at Lund Cathedral and was ordained in 1984. She has a special interest in the dialogue between art, theology and the church and has contributed texts to various publications in this field. The Cathedral has an ongoing programme of exhibitions by contemporary artists, which Lena has been responsible for since 1996. Her PhD thesis in theology, from Copenhagen University, focused on performativity and the body in liturgy and theatre. She has also been teaching liturgy and she is a member of the Råängen Steering Group.
www.lundsdomkyrka.se

Our public programme is made up of a wide-ranging series of public events for Lund residents, architects, planners, geographers, academics, artists, curators, writers, local politicians, curators and developers to debate the nature of the Church’s development, the commissioning programme, and other models of urban expansion and cultural provision.

Sign up to our newsletter to be kept up to date with the programme.

Our public seminars address fundamental issues relating to the development project, such as time, money and land. Other seminars involve more focused discussions around specific commissions and issues that arise as the project evolves. So far, speakers have included artists, architects, curators, developers, archaeologists, dancers and writers. These are open to everyone and have included walks, talks, symposia, themed meals, screenings and workshops. We would like these events to attract both local and international audiences to expand the conversation beyond the project in Lund and to position the programme within a broader critical framework.

Nothing is ever finished 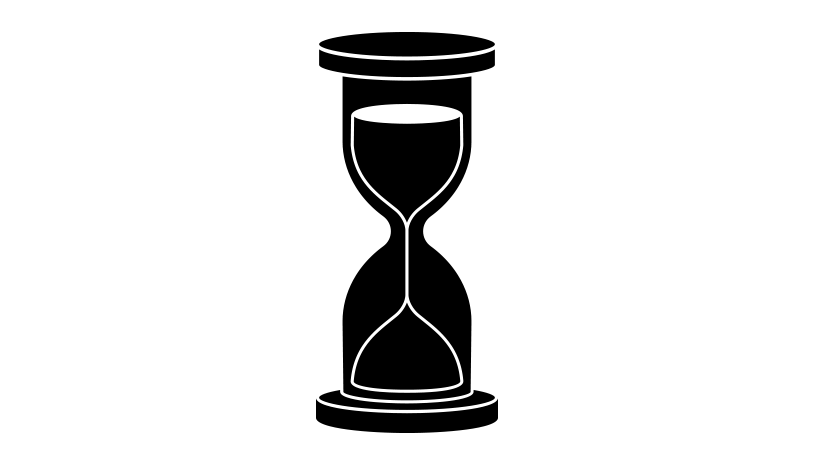 The first Råängen seminar was held on 28 April 2018. Speakers from Lund, New York, Berlin and London considered the subject of time as a cultural construct and tool for project development. The theme linked to the Lund Cathedral’s presence in the town over a 900 year period (since 1123, when the east-alter in the crypt was consecrated) and the commitment to their land in Brunnshög a thousand years into the future.

We discussed the unique nature of long-term projects; the concept of earthly and heavenly time; our fragile relationship to the land; and the varying and magical ways that contemporary artists have worked with the subject of time. We challenged the idea that the future is the only place available for imaginative play; we located Råängen within the history of mankind, and considered pre-modern concepts of time as place. 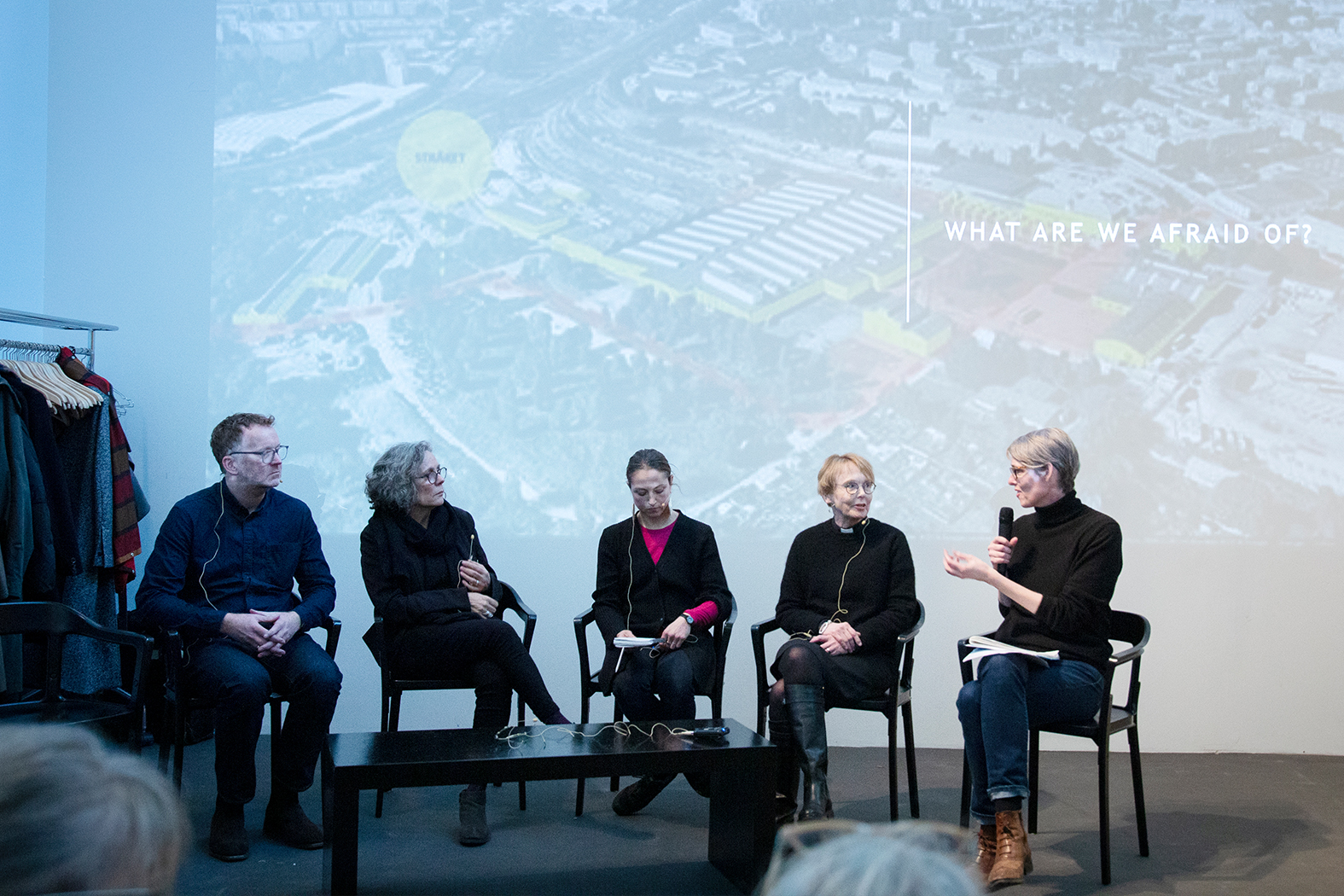 Our second seminar ‘Intervene/Shift/Compel’ was held on 28 February 2019 at Moderna Museet Malmö. Using a prompt from artist Stephen Willats, “What I want to do is intervene in the fabric of society”, we invited five artists and curators from Sweden, Norway and Britain to address the following questions: How can artists contribute to  a discussion about the way we live in the 21st century? What are the mechanisms that artists, curators and commissioners use to make democratic, active public spaces that address urgent, political and social issues? Can such projects bring about societal change or shifts in perception?

This event was part of the public programme for Nathan Coley’s Råängen sculpture ‘And We Are Everywhere’. The work addressed questions regarding access to land, homeless states and the role of the church in contemporary life. The aim of the seminar was to inform the role that art and culture will play in the Cathedral’s long-term urban development programme.

We are keen to involve local people in the discussion about the expansion of Lund, what it means, and how art and architecture can help extend the conversation. Råängen Conversations involve local speakers and participants. All welcome! 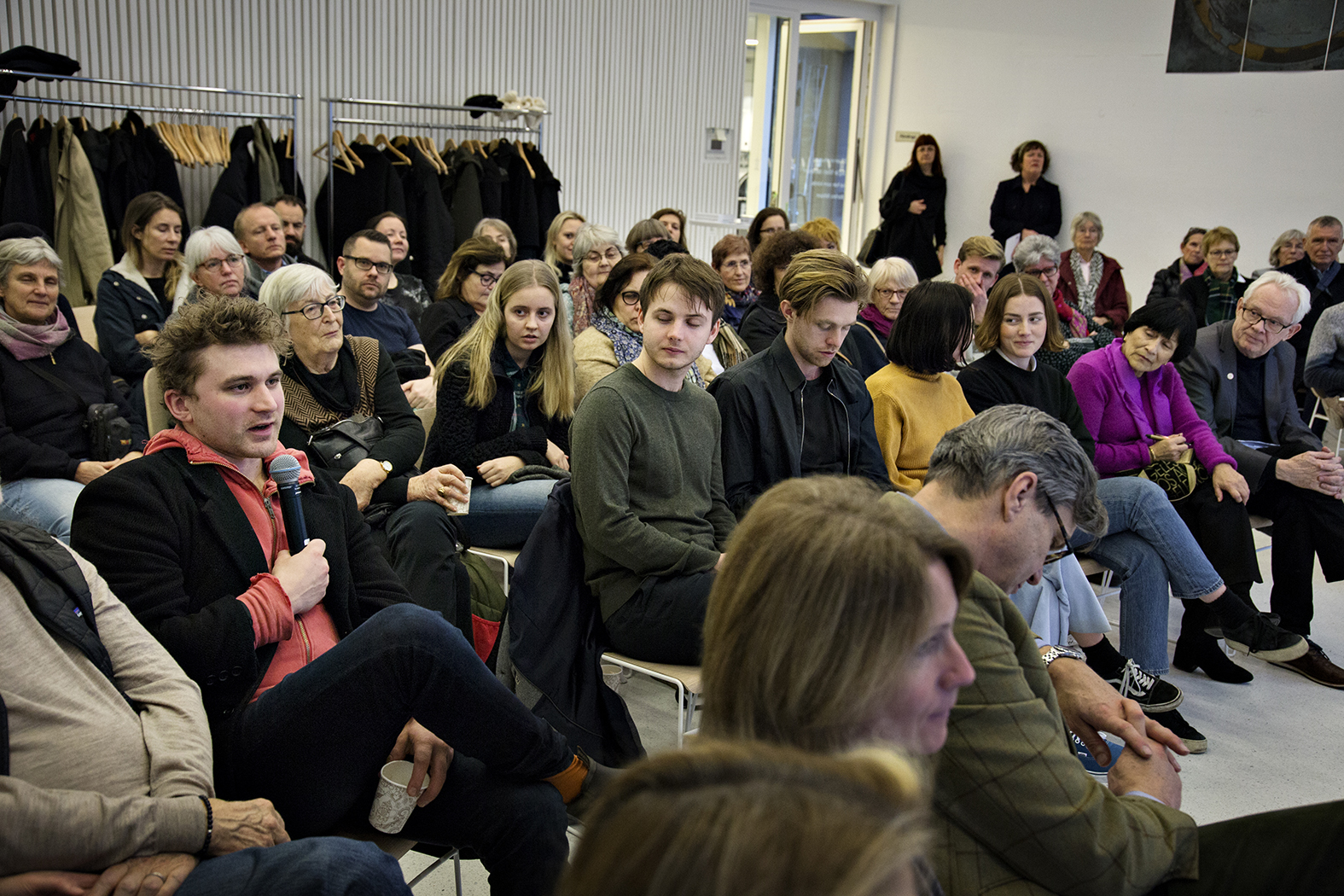 We were delighted with the response to our first Conversation event held on 27 January 2018 at the Domkyrkoforum in Lund. The subject under discussion was Nathan Coley’s artwork ‘Heaven Is A Place Where Nothing Ever Happens’, located adjacent to Lund Cathedral between Nov 2017 and March 2018. The work was a huge talking point in the town; became the focus of many social media posts and lit up a part of Krafts Torg throughout the dark winter months. 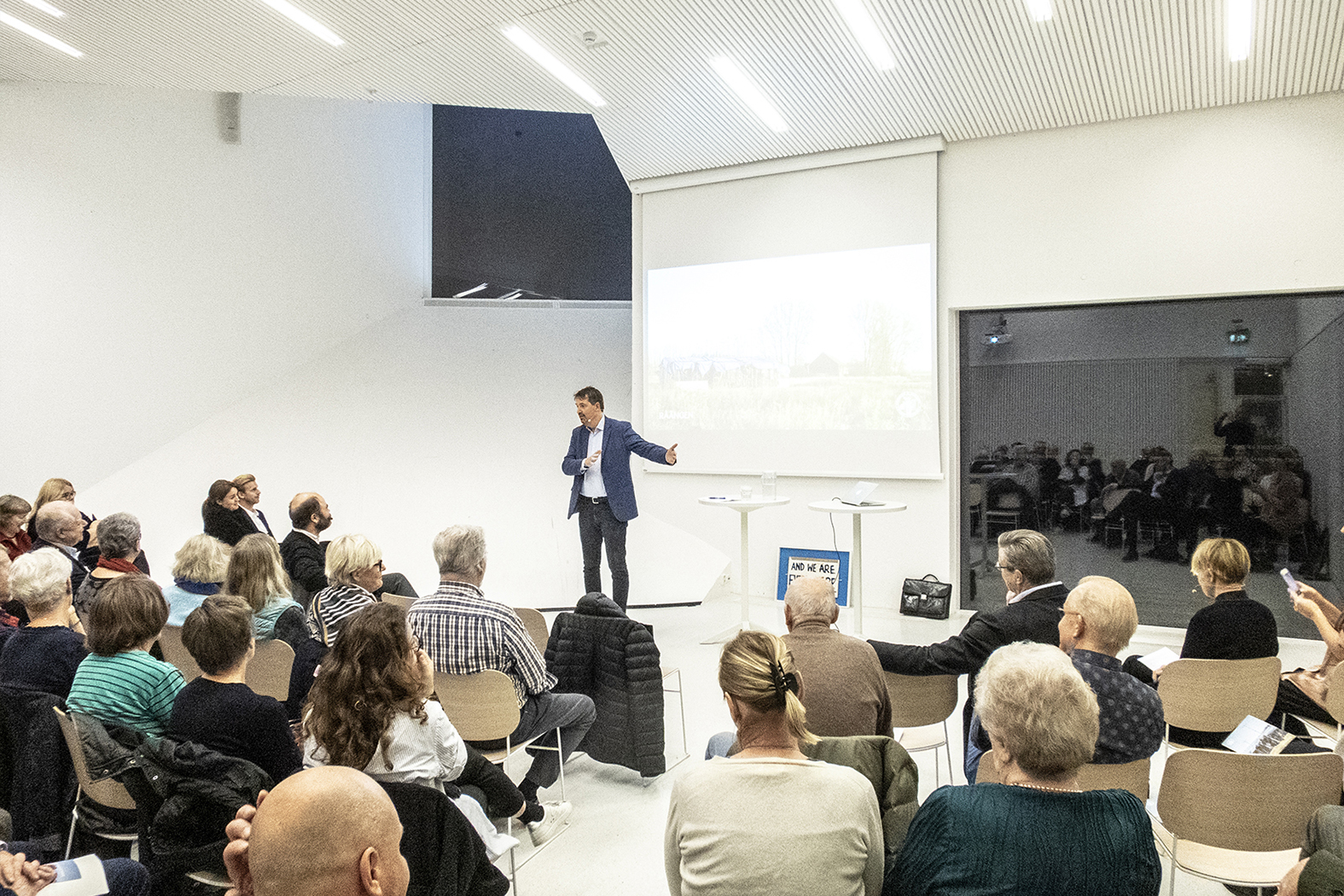 For Råängen’s second public conversation, Chaplain Lena Sjöstrand invited Lund resident and high profile activist Johan Wester to discuss the questions that have arisen around Nathan Coley’s sculpture ‘And We Are Everywhere’. The artwork has initiated a lively debate in the public media and social forums which will be fed into our plans for the Brunnshög development.

A garden for everyone 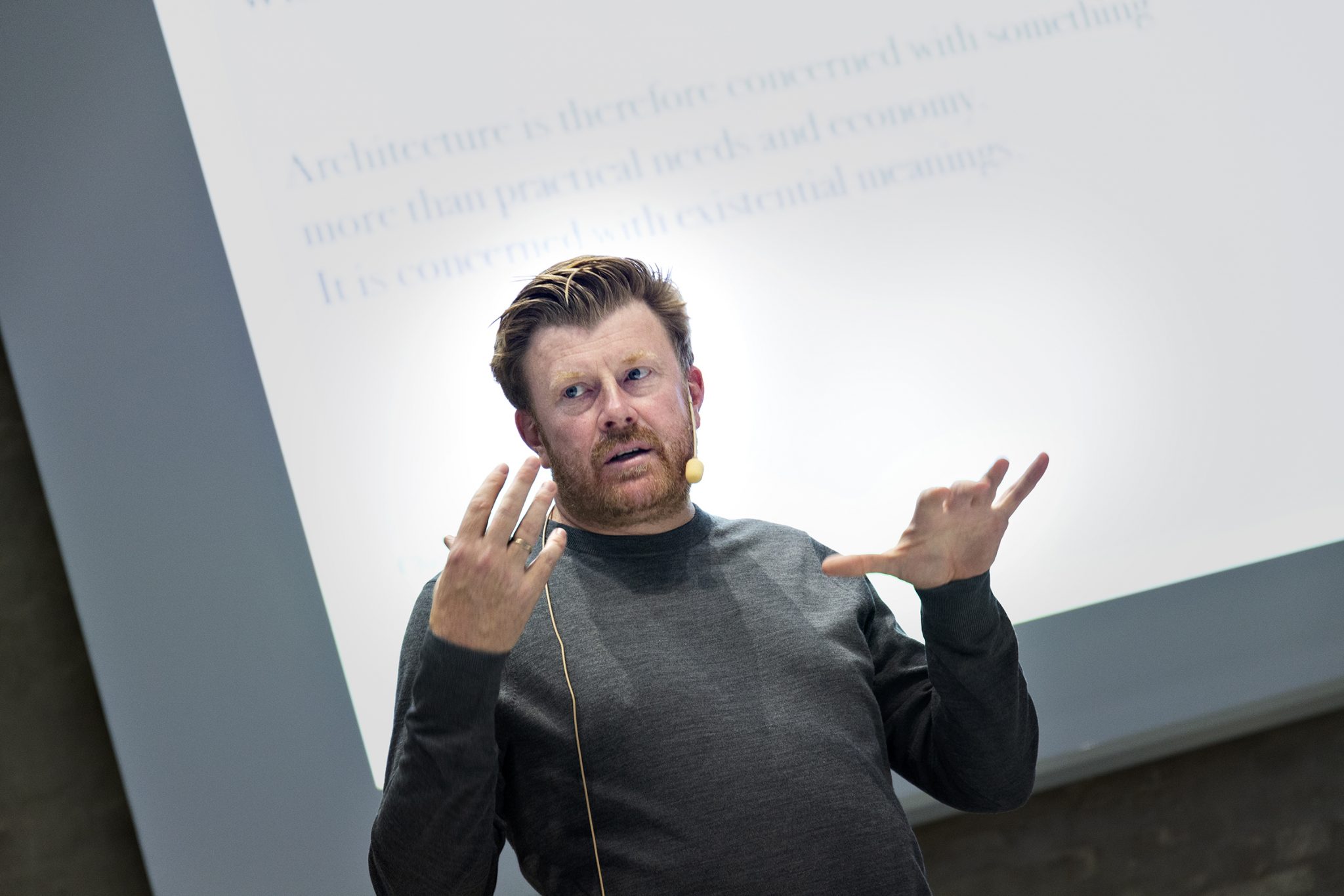 In September 2019 we held an event at Skissernas Museum in Lund that focused on ‘Hage’, Brendeland & Kristoffersen’s public garden for Råängen, due to open in 2021. Geir Brendeland introduced the practice’s approach to the commission, the design concept and its relation to Lund. Other Råängen team members discussed elements of the build, the materials, and the connection to theology and community. The evening ended with a discussion with audience members.

The event was organised around a long table which echoed the design of the communal table at ‘Hage’. A selection of items connected to the design and construction of the garden were displayed on the table, including watercolours by Geir Brendeland, plans, maquettes, fruit, planning documents, engineering drawings, photos, models, Cor-ten steel samples and bricks.

Involving children in the Råängen programme is one of our key objectives – to encourage young people to talk about the development of their town, what art can do to the spirit of a place, and what home means to them. We’d also like to amass a list of priorities for children in new developments, to ensure that their voices are heard throughout the design stages. To this end, we are working with schools and arts organisations in Lund to deliver a programme of workshops and trips for children, both at primary and secondary level.

And We Are Everywhere – schools programme 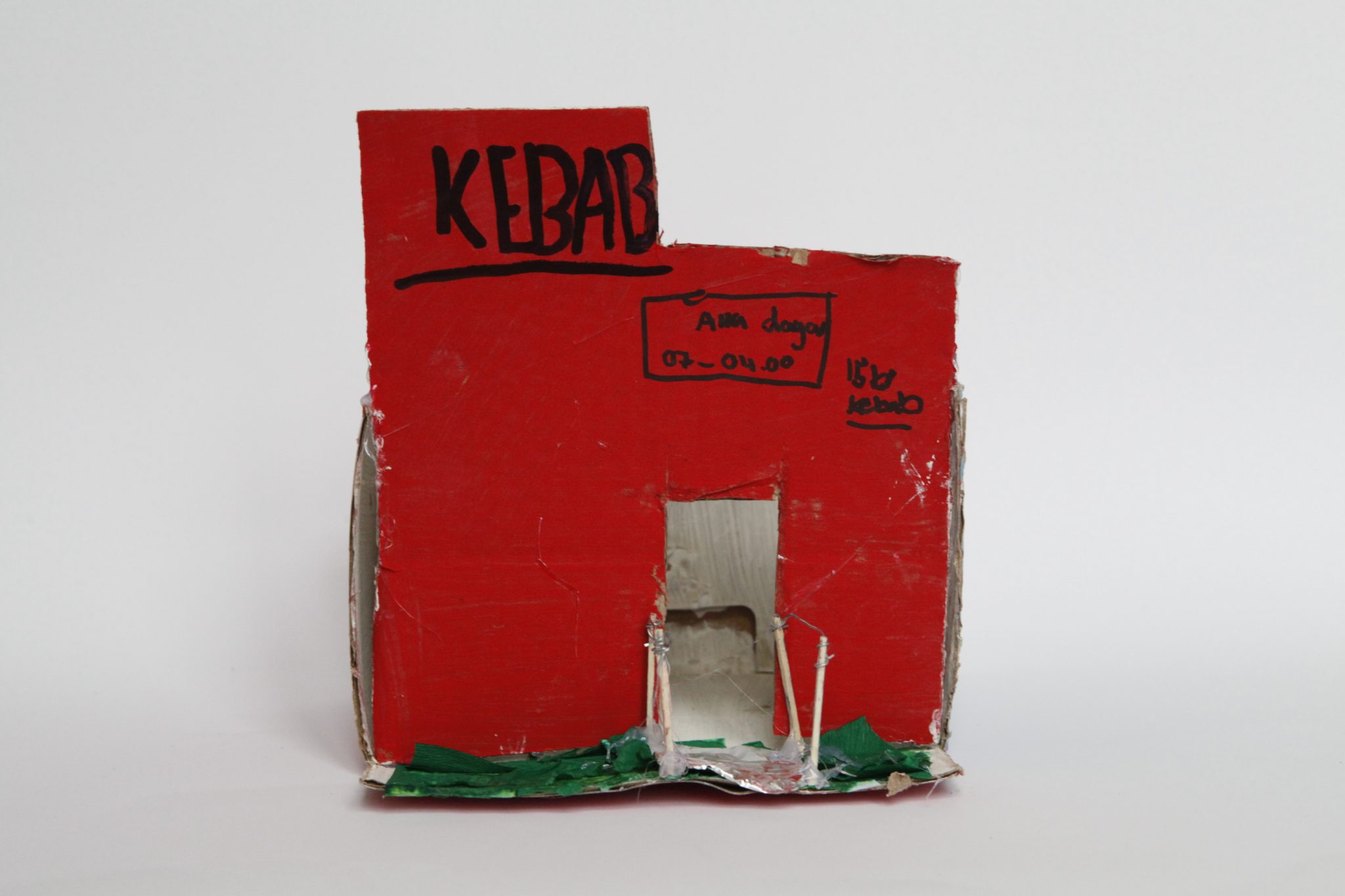 In October 2018 staff at Lund Cathedral and the Skissernas Museum worked together to develop a programme of workshops and site visits to discuss Nathan Coley’s artwork ‘And We Are Everywhere’.

Children from pre-school age to secondary school took part. Day 1 entailed a visit to Brunnshög with a priest and a teacher where children explored issues raised in the work. Students talked about what was important to consider when building a new neighbourhood; what do citizens need in order to thrive?; what is the function of art and how should a city of the future look? For day 2 of the programme, children visited the Skissernas Museum where they saw other examples of site-specific artworks. They discussed the importance of public engagement and participation, continued their conversation about building new towns, and made models of an imaginary new neighbourhood.

These models were on display at the Domkyrkoforum in Lund from 9 Jan – 22 February 2019.

An important part of Råängen is to reflect on the various themes raised throughout the programme. Here you will find commissioned texts by curators and writers who have been involved in our project. We’ll bring all of these texts together to form a book in future years.

Cathy Haynes: Heaven is in the east 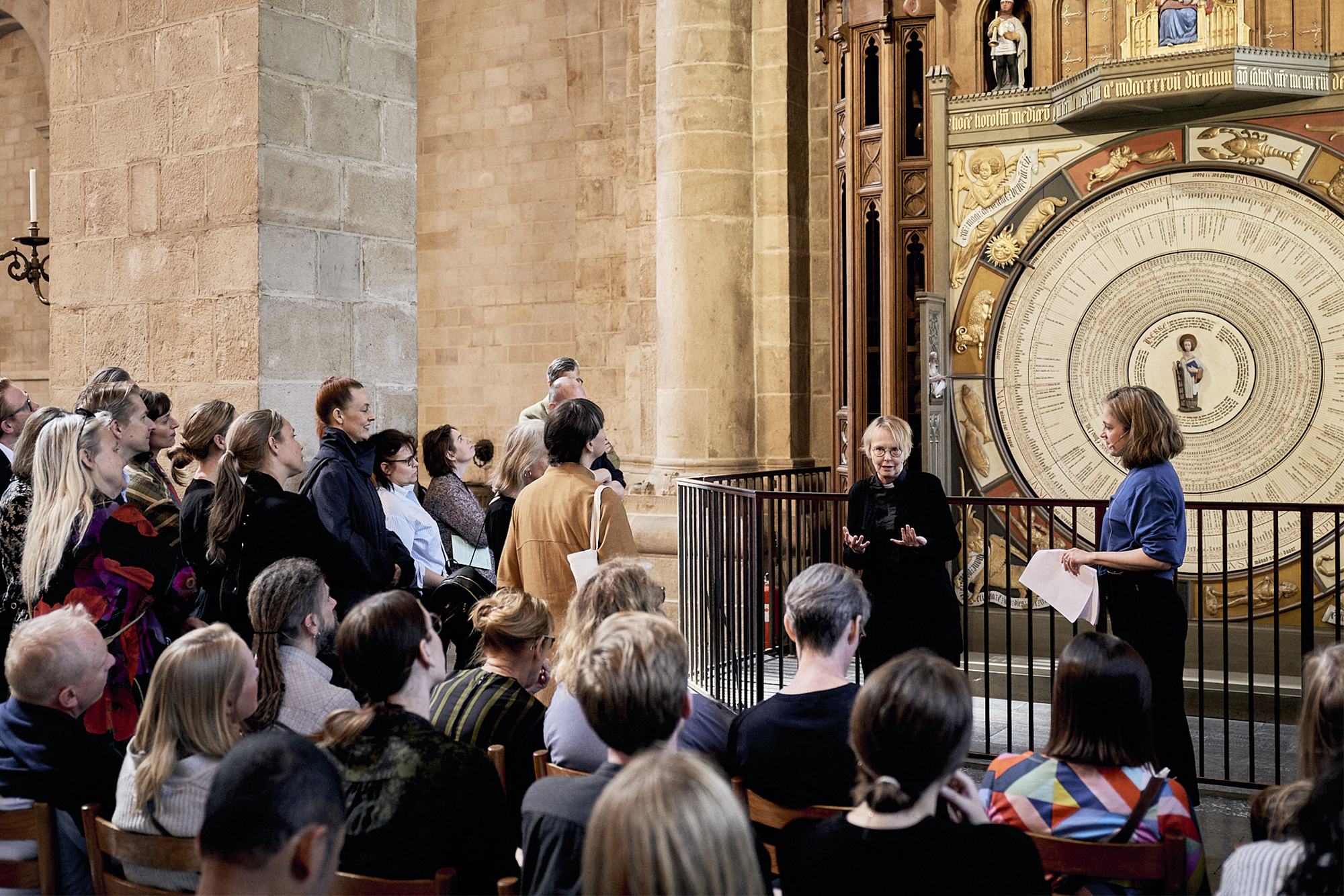 Cathy Haynes has written at text based on a time walk through Lund Cathedral with the Chaplain, Lena Sjöstrand. The event was part of the Råängen Time seminar held in April 2018. 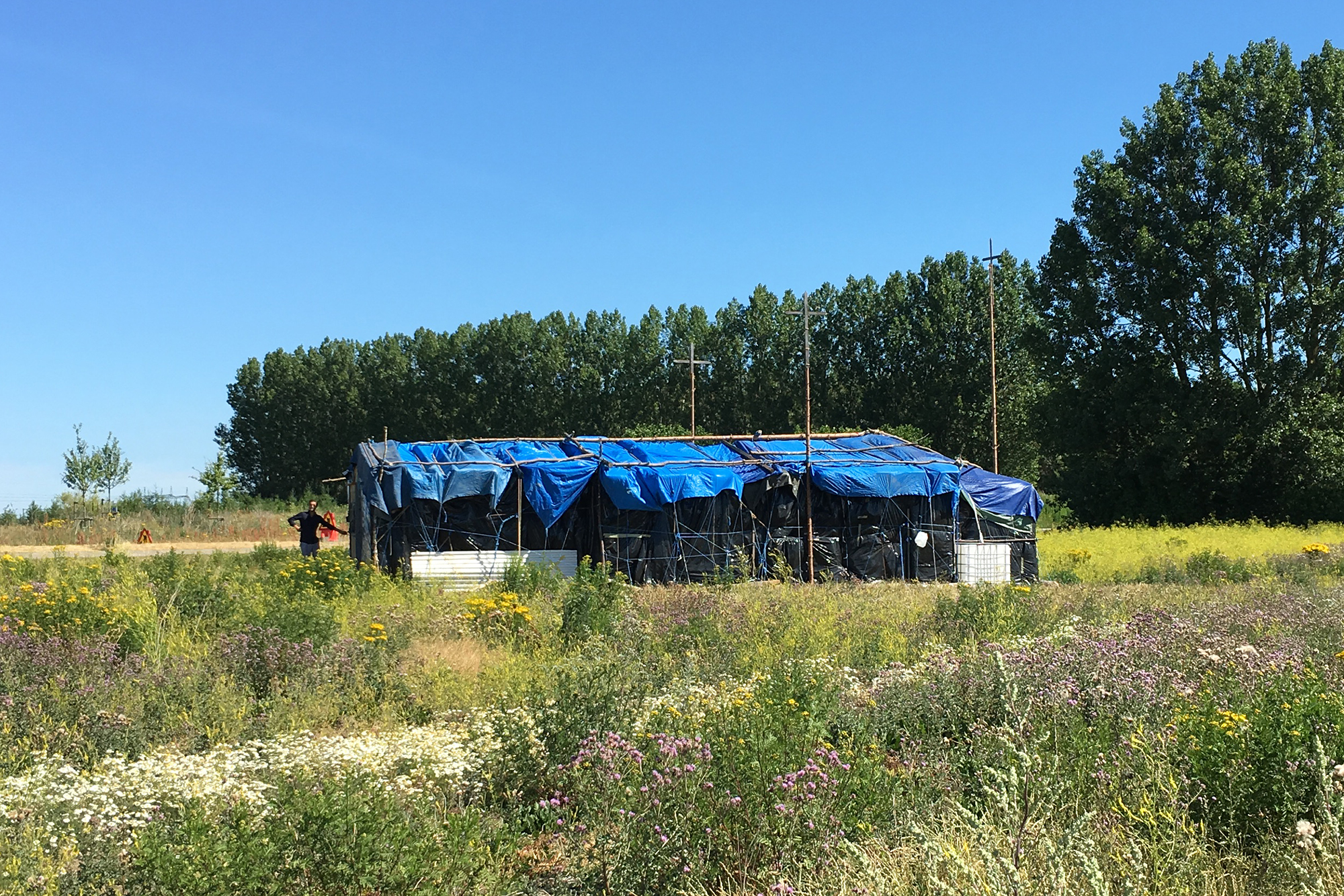 Jonatan Habib Engqvist has written a text reflecting on Nathan Coley’s Råängen commission ‘And We Are Everywhere’ (2018–2019).

Due to the incremental and open-ended nature of Råängen, we are commissioning short films to document specific points in the process, disseminate the programme more widely, and to capture some of the multiple voices involved. Films made to date include interviews with artists, Lund Cathedral clergy, curators, architects and local residents.

‘Heaven Is A Place Where Nothing Ever Happens’ by Nathan Coley was installed adjacent to Lund Cathedral from November 2017 to March 2018. In this film Co-Director of Råängen and Chaplain of Lund Cathedral, Lena Sjöstrand, talks about the work with curator Jes Fernie, and members of the public respond to the work.

‘And We Are Everywhere’ was a new commission by Nathan Coley for Råängen, located on the Cathedral’s land in Brunnshög from June 2018 to March 2019. In this film the Bishop of Lund, Johan Tyrberg, responds to the work; artist Nathan Coley, curator Jes Fernie, and landscape architect Jake Ford discuss the issues raised through the work.

Architect Geir Brendeland introduces the commission to design the first public space at Råängen, reflecting on the collaboration and emerging proposal.

Råängen project Director Lena Sjöstrand describes the ambitions for Hage and the careful process of developing a project over time.

Landscape architect Jake Ford talks about Hage’s role as a public space within a future neighbourhood at Råängen.