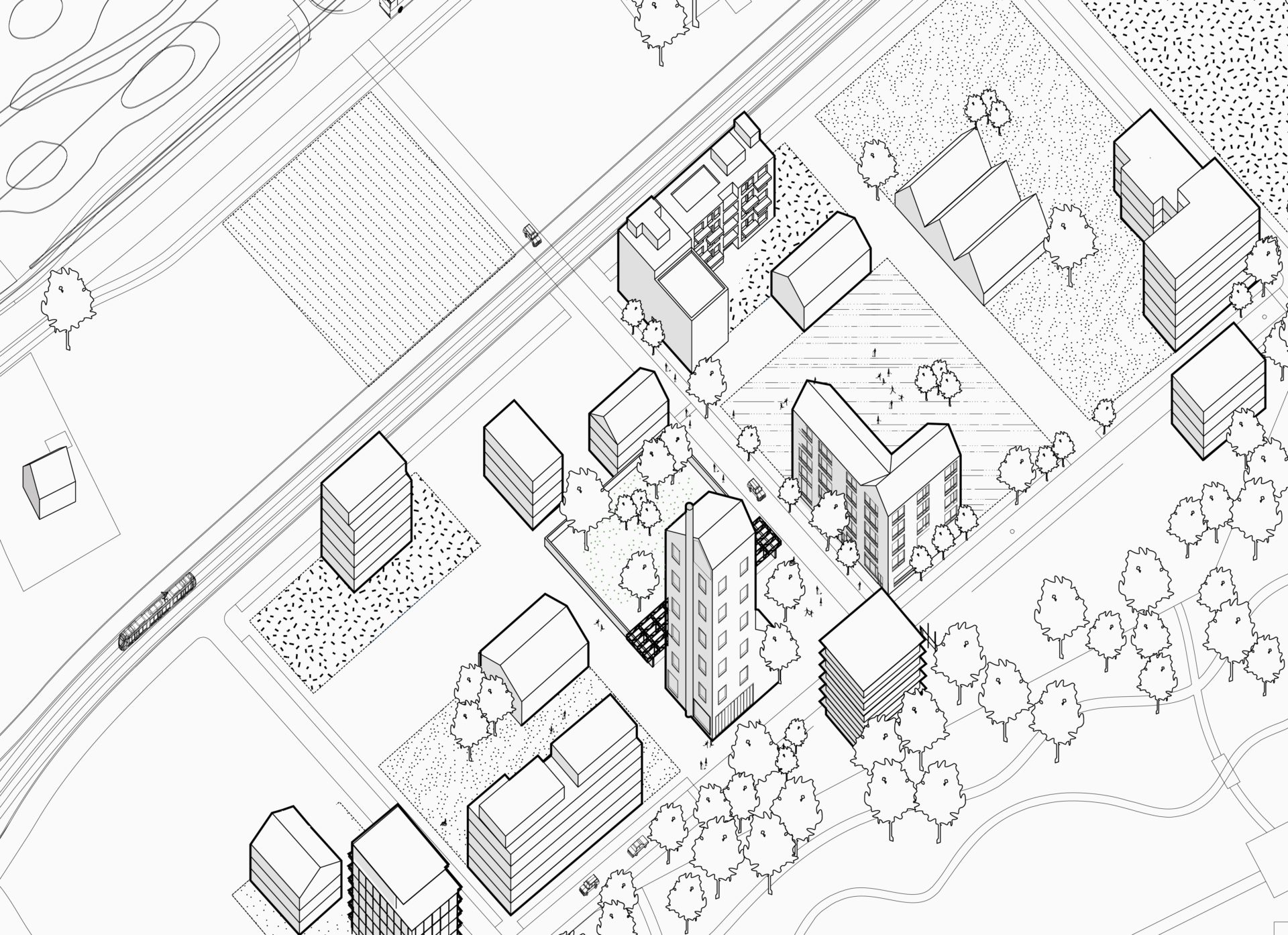 What we’re doing in Råängen is deceptively simple. On a twelve-hectare piece of land that is currently a series of fallow fields on the outskirts of Lund, we are commissioning artists and architects to make art, buildings and conversations for a new community.

We are taking our time, testing ideas, asking questions, liberating ourselves from the idea that in order to progress, we must provide answers to these questions. We have no masterplan but rather an approach to building. Each activity feeds into the next; questions and issues that are raised by the people we involve in the commissions, public events, and texts, become part of the brief for the next project.

We think of each strand of activity as a commission. No differentiation is made between an artwork, a public garden, and a building. Artists and architects are commissioned in very similar ways, with open briefs, and an invitation to talk, look, see and do.

It is important to us that we build a neighbourhood which is an extension of the historic town of Lund rather than a development on the periphery. In order to achieve this, we understand that there should be no whimsical rendering, no point of arrival that sets out or celebrates a finished process, but rather a slow incremental, complex pattern of growth that develops over generations and is never complete.

While there are few residents currently neighbouring the site, we recognise that this is a real place, with a history, an atmosphere, an identity that must be honoured. When you stand in the grass, looking out to an expansive horizon, there is a sense that time and space have collapsed, but Råängen is not a blank slate; this is not a tabula rasa. 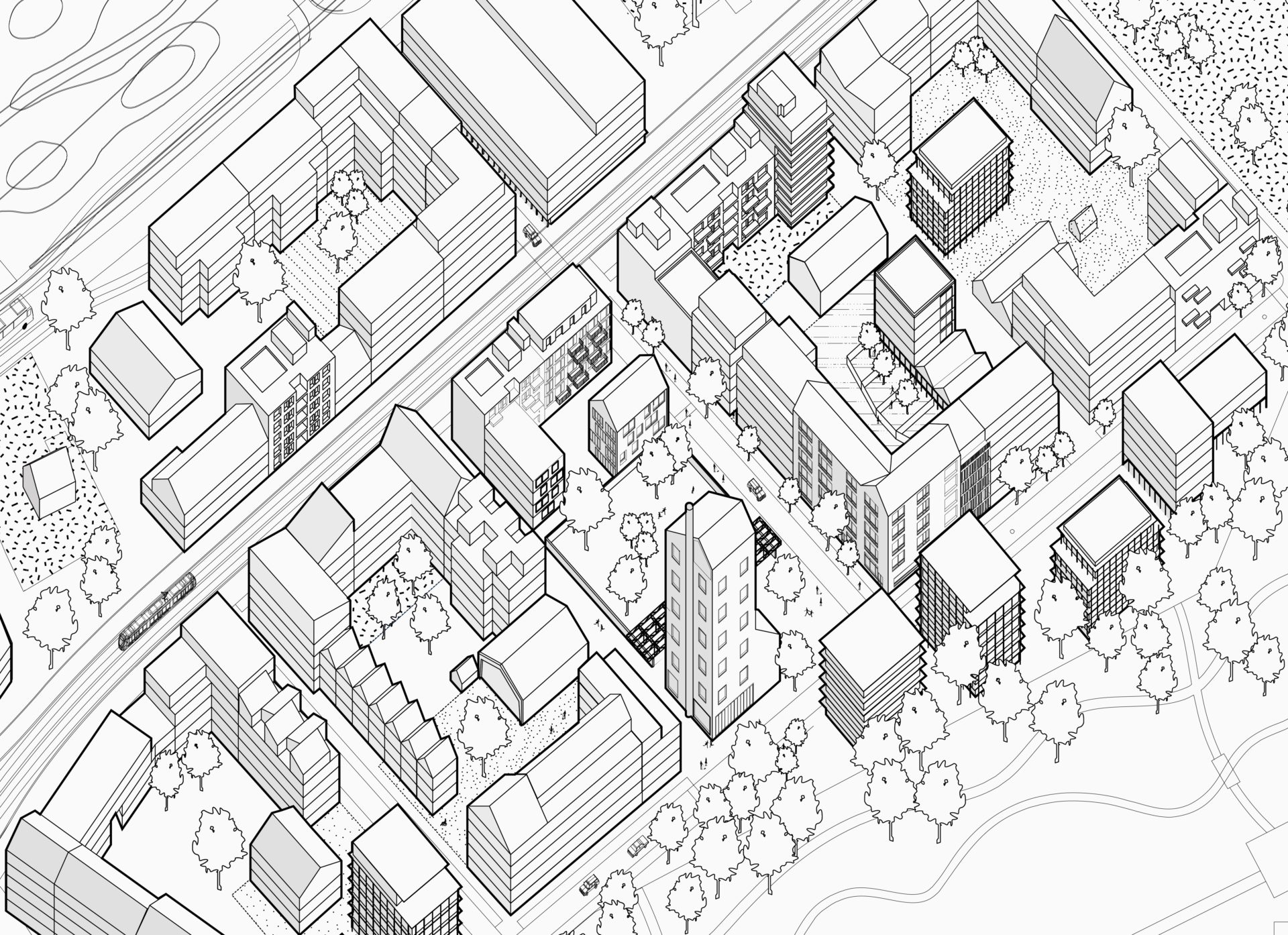 Whilst we are eager to ask questions, we do have a clear sense of the values that we would like to embed in this new neighbourhood: respect and care for nature and productive land; a sense of ownership and pride, and an openness and hospitality for all. These values must be tested, framed and scrutinized if they are to have any real traction in the everyday reality of residents.

Nathan Coley’s provocation to the Cathedral in the form of ‘And We Are Everywhere’ has established the basis for a discussion about the Church’s presence in the new community and our commitment to building a neighbourhood for all. Brendeland & Kristoffersen’s public garden, ‘Hage’, has significantly informed the conversation about the way we think about the relationship of Råängen to Lund and the slow transition from farmland to city, and has cemented in our minds the power of creating a public space which defines the parameters for future buildings. Architects Flores & Prats are now exploring the potential for the first buildings to begin the slow process of building and supporting a new community.

Collaboration is a central part of our project: we will not be delivering everything ourselves but in partnership and dialogue with local businesses, commercial developers, housing co-operatives, cultural organisations, and individuals, as well as the local authority. We are keen to learn from other initiatives, places and practitioners. We’ll borrow ideas (architect Yona Friedman’s beautiful little cartoon sketches with accompanying text: ‘It cannot be planned; it can only happen’ is a particular favourite) and make links across continents and histories to recognise that what we are doing is not new.

We’ll be working with others to deliver 85% of the building programme in Råängen; the remaining 15% will be delivered by us. The profit from the former will feed into the latter. The developers we work with will be interested in the path we’ve chosen to take and will have expressed a desire to work with us to make a community.

In our building programme, we’ll be asking what can be left to chance and what should be fixed, and we’ll be looking at different ownership models, self-build programmes, and changing demographics. We’ll also be considering spatial standards, the sharing economy, how to build responsibly in a climate crisis, and who has access to housing. We aim to create space for a broad discussion about how we should live in the 21st century. The questions tested in our own projects will, we hope, inform the wider development of Råängen.

The project is modest in scale and will only become relevant if built. There is every chance that we will fail but we hope that some of the discussions and the emerging results will influence other projects further afield. 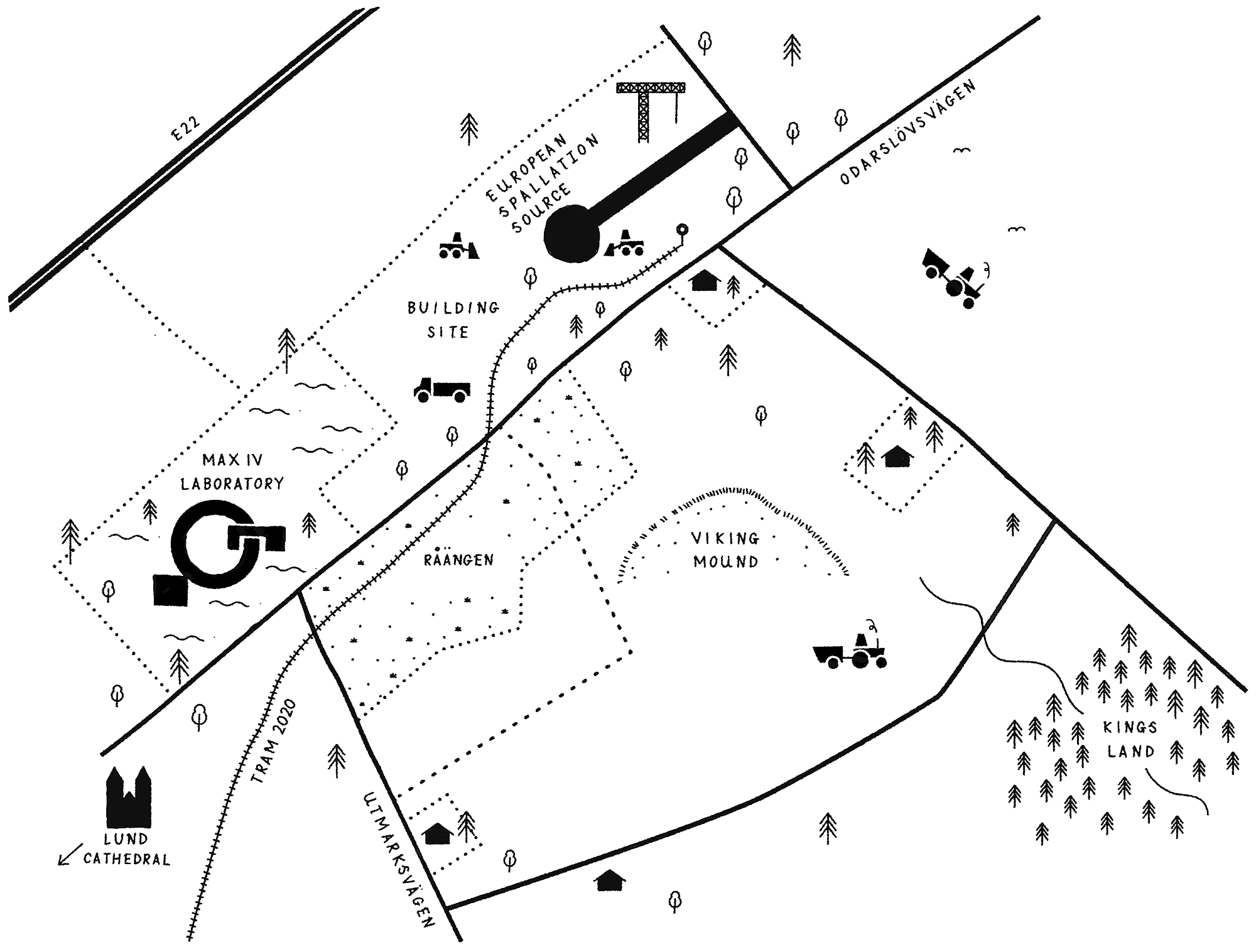 Brunnshög with the Cathedral’s land marked to the south of Odarslövsvägen.

Råängen is both a development project and a platform for discussion about what happens on Lund Cathedral’s land in Brunnshög, an area on the north-east edge of Lund, in southern Sweden. The city’s expansion will significantly change the character of the area and include new housing, research facilities and parks, all built on what was, until recently, farmland.

Lund Cathedral has allocated twelve hectares of the land it owns in Brunnshög to the development of a new neighbourhood. We have created a programme of discussions and commissions as a tool for conversation, critical debate and engagement to explore the ways that new parts of cities are built. The programme will inform the long-term development of the Cathedral’s land and result in a neighbourhood that delivers opportunities for new ways of living, working, and studying in the 21st century.

Råängen (which translates as ‘raw meadow’) is developing a narrative that builds on the involvement of artists, architects, local people, developers, contractors, and university staff, creating the groundwork for future stories in a new neighbourhood. It will provide a framework for discussion about the fundamental issues at stake in the overall development of Brunnshög: value systems, belief, ownership, fear, faith, time, beauty, commitment and endeavour.

Starting with temporary installations by British artist Nathan Coley in the centre of Lund and Brunnshög in 2017 and ’18, the programme of commissions continued with a public garden designed by Norwegian architects Brendeland & Kristoffersen which opened in 2021. The first buildings, designed by architects Flores & Prats, are due to be completed in 2025. Our programme includes a wide-ranging series of public events, talks, walks, school workshops, and films – all designed to create opportunities for debate, participation and critical analysis. Further down the line, there is potential for artists to be invited to carry out residencies and permanent commissions in the public realm.

The Råängen project is funded by the Cathedral board rather than the members church fee. 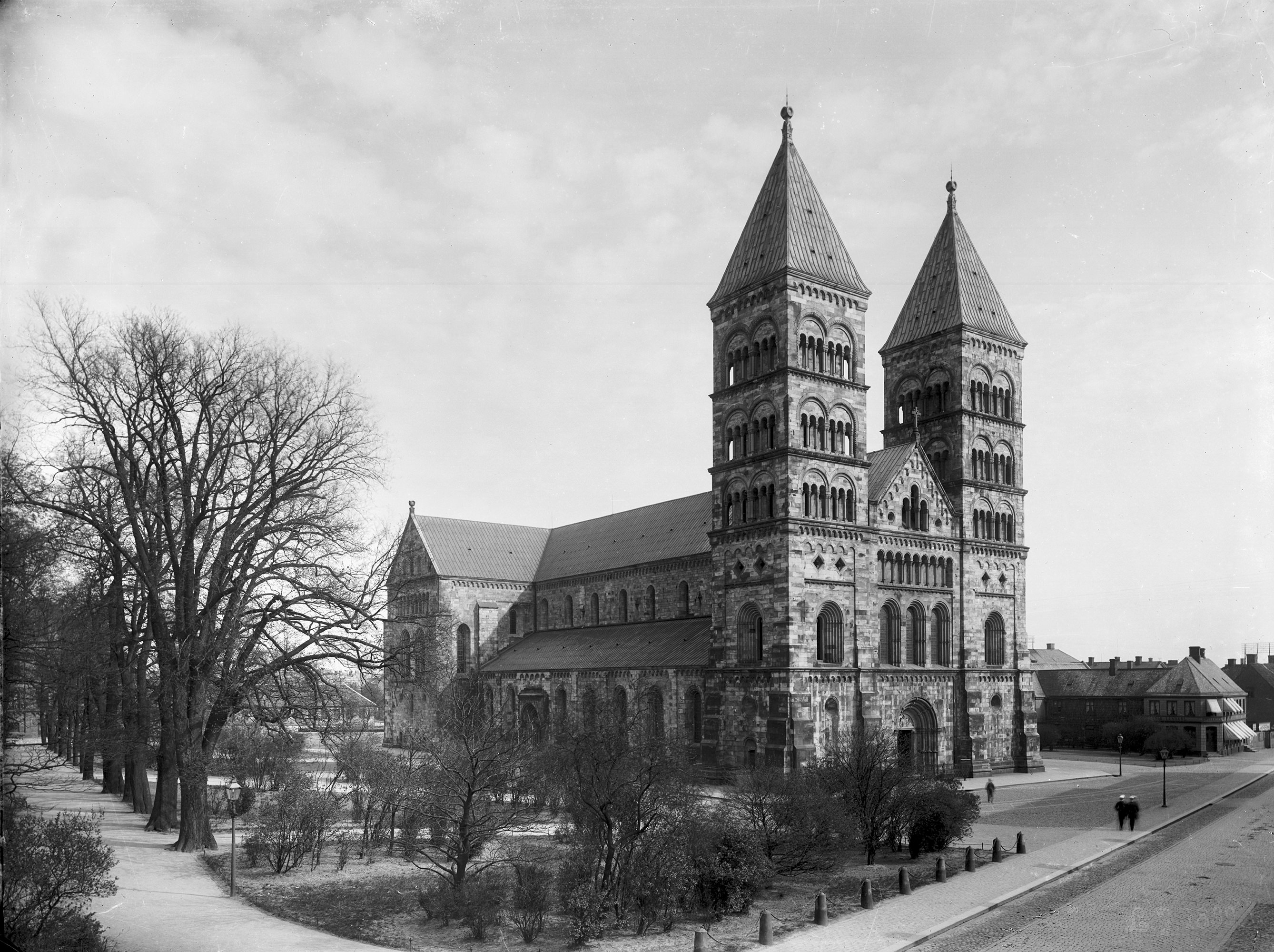 Lund Cathedral from the north-west. Per Bagge 1899. Historical Museum at Lund University.

This is the first time in recent history that the Cathedral has chosen to play a key role in the development of its own land. The project aims to invest as much commitment and care as our predecessors have employed over the last 900 years and ensure that the values and experiences of the Cathedral are integrated into the project in a way that respects this historic context while embracing the future. The development will address 21st century challenges and facilitate community enterprise to help create a neighbourhood that is able to meet people’s needs for the next 1,000 years.

There are a number of specific challenges which the Cathedral and wider project group wish to investigate:
How can a neighbourhood balance the wellbeing of both people and nature?
How can the public realm impart a sense of pride, ownership and appreciation of beauty?
How can the notion of hospitality, one of the key principles of the Cathedral, be integrated within Råängen?
Can a planning process express the radical idea from the Eucharist – one bread and one humanity?
Can a programme of events, talks and critical design projects provide an enriching context where culture, scientific research, local interests and academia overlap? 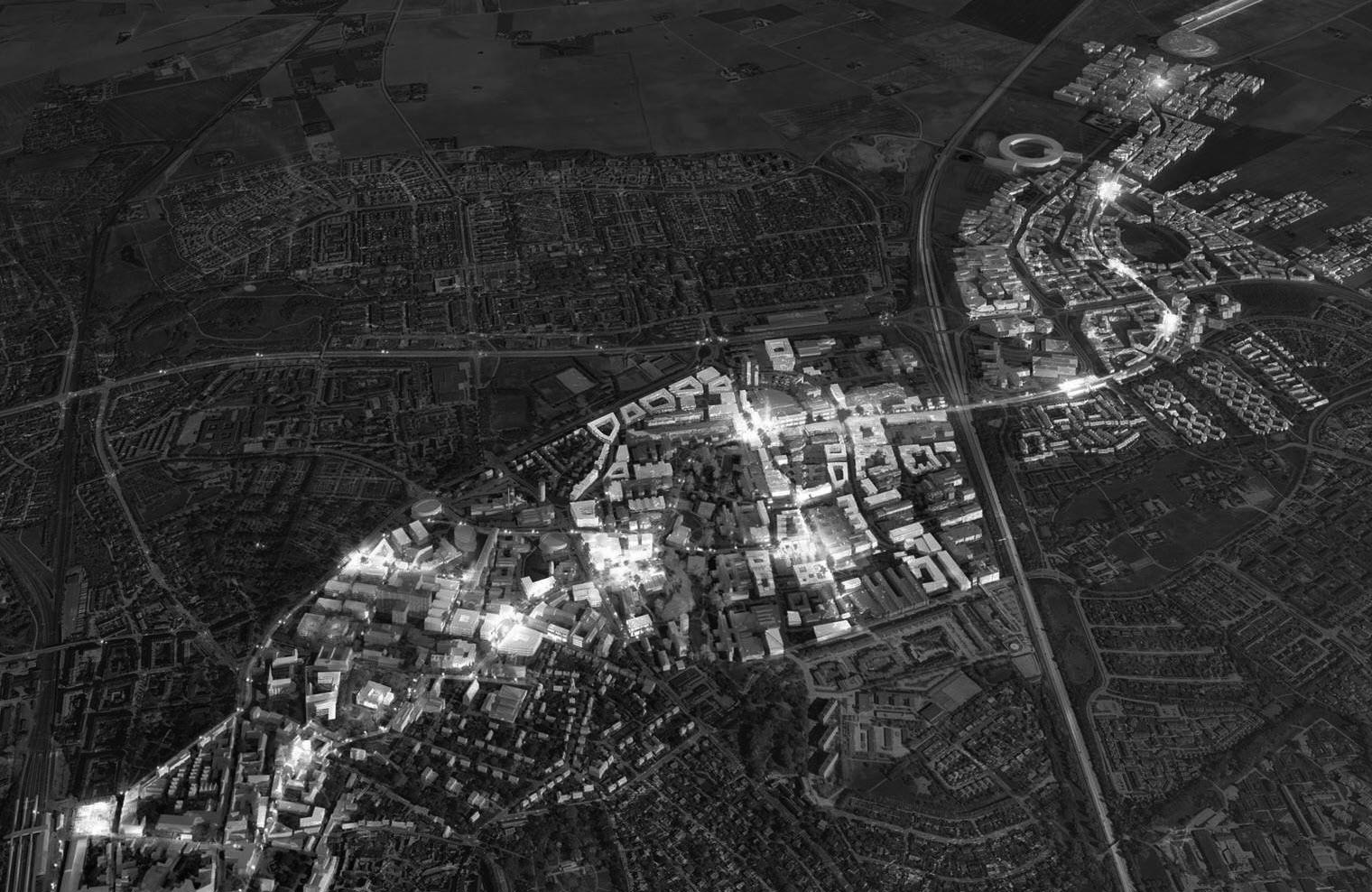 The development at Brunnshög is one part of a larger city expansion project for Lund. Image: Lund Municipality.

Råängen is part of a larger development programme led by Lund Municipality in partnership with Lund University, Skåne Region and Lund Cathedral. The 450-hectare area is expected to accommodate 6,000 new homes, 600,000sqm of workspace, a new park and world class research centres by 2050. The project will significantly increase Lund’s housing and workplace infrastructure.

White Arkitekter is leading the Church’s development programme, establishing a strategic framework that began in 2020 and which will extend over the next thirty years. The practice is developing a responsive, long-term approach that focuses on the quality and characteristics of the land which, in turn, informs an approach to building, models of ownership and ways of living. Innovative architectural projects will be developed over time, delivered by many different actors, each one taking its cue from previous projects, responding to the context and needs of local people and the developing community.

Each phase of the development will relate to Lund Municipality’s masterplan, but we will develop our own distinctive character, focusing on issues relating to value, context, community, ecology and public provision, working with artists throughout the process. We are interested in posing questions as well as formulating answers. As Lena Sjostrand, Chaplain, Lund Cathedral, has said, in carrying out this project, we are looking to “make stories and ask questions”.

Project Group
We have formed a Project Group made up of representatives from the Cathedral, White Arkitekter, and the curator working on the project. This group is responsible for the delivery of the built project and programme.

Advisory Group
The Advisory Group is made up of art and architecture specialists based in Lund, Malmo, and Stockholm. The group advises, guides and challenges members of the Project Group on programming and strategy.

Consultants
A growing number of consultants and fabricators are working with the Cathedral to deliver the first projects and develop strategies for the future phases of the project: Aurora, Edge, Hilson Moran, Price & Myers Engineers, Proswede, Trivector